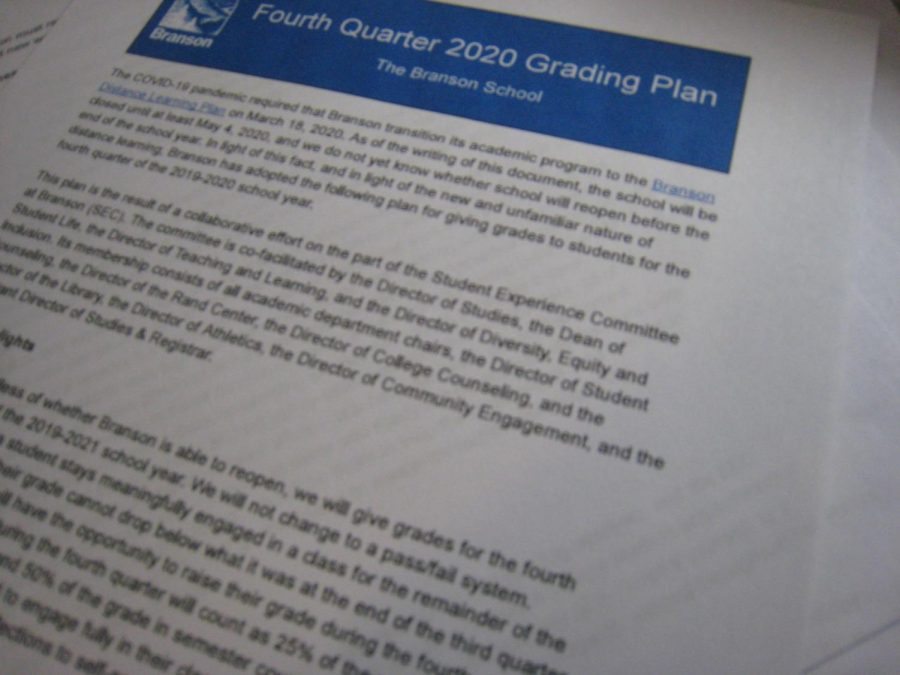 The Student Experience Committee released a new grading policy in early April in response to the new distance learning reality. Given they are adequately engaged, Branson students’ grades can no longer decline from their third-quarter ones.

The plan for student evaluation places emphasis on completion and reflection rather than on accuracy or substance. The new system will be in effect until the end of the school year.

“We kept what was best for students at the heart of every decision we made,” said Rich Parsons, director of studies. “We felt strongly that we didn’t want distance learning to penalize students, particularly since it’s a learning environment that none of us are familiar with. That is why we decided that grades from the third quarter cannot go down.”

Some schools and school districts replaced letter grades with a pass/fail or some other credit system, a system Branson temporarily entertained before choosing to preserve its letter-grade system.

“We briefly talked about switching to pass/fail grades for the fourth quarter, but we felt that was unfair to students who had worked hard prior to transitioning to distance learning,” Parsons said. “We also felt that grades are a better fit for what we do at Branson.”

Administrators had also considered “locking in” students’ third-quarter grades, but wanted students to be able to better their grades, leading to the fourth-quarter grading guidelines.

“We do want students to demonstrate that they are learning, which is why the grading plan includes a percentage for meeting learning goals, but it is less than 50 percent of the overall grade and far less than what it would be if we were meeting on campus,” Parsons said.

He also noted that the plan prioritized students.

“As far as considering teacher needs,” he said, “we wanted to make sure that whatever we implemented was manageable for teachers, but doing what was best for the students was the primary driver.”

However, he also thanked the teachers for their hard work.

“The teachers have been amazing through all of this. They immediately recognized the need to be flexible and to adapt, and they have all done it,” Parsons said. “I’m very proud of us all for developing such a thoughtful system in such a short period of time. Your teachers have worked very hard, and I hope the students feel that the system we arrived at is fair and supportive.”

Whitney Livermore, a history teacher, also had a similar assessment of the grading system.

“I’m happy that we’ve designed a grading system that still gives students the chance to improve their year-end grade but that also takes some pressure off of them as we all adapt to a new way of learning and working together,” she said.

Livermore misses longer pieces, such as essays, which the new online-learning environment have made her unable to assign. However, she said, she has been impressed by the reflections the new grading system outlined.

“I am a big fan of the reflection pieces and am enjoying finding new ways to be creative with other assignments,” Livermore said. “Because of the change in grading policy, we are able to think a bit more ‘outside the box’ about what kind of assignments we design for optimum learning, engagement and fun!”

Rob Rudy, a sophomore, compared the new grading system to the previous one, saying, “while regular grading would be too stressful for students during this already stressful time, completion grades and reflections help students to still stay engaged in classes without giving them too much slack.”

Rudy also praised the plan’s declaration that students’ grades likely can’t drop below their third-quarter ones.

“Distance learning is much more distracting than in-class studying due to the fact that there are so many distractions in a home workspace and outside students’ windows. Also, there are inequality issues due to some students having better internet connection than others as well as periodic internet shutdowns that would present many issues to studying. As such, it wouldn’t be fair to penalize students for the difficulty of distance learning,” he said.

“Overall, the new grading system seems well-suited for the current situation,” Rudy continued. “The new grading plan promotes focus in a class by not giving students too much slack but also takes into consideration the many issues and inequalities brought up by distance learning.”