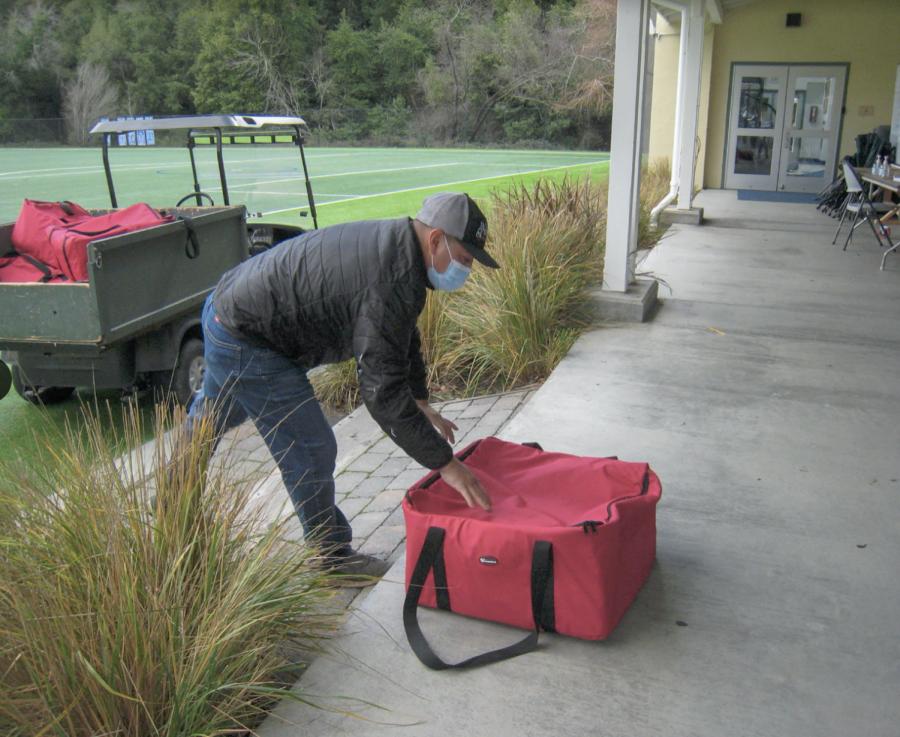 They line the buffet, dozens deep, and never fail to appear every school day. Crowded and anxious, they await their daily midday meal. But these Branson denizens cast into the Commons not a din of chatter but a pall of silence.

These green, plastic lunch boxes and the space they temporarily inhabit serve as reminders of the coronavirus pandemic’s far-reaching impacts. Students no longer eat their lunches in the Commons; boxed, their food goes to distanced lunch cohorts.

People still roam the cavernous Commons, though for different reasons. Students arrived for classes in the repurposed hall on a recent Friday morning to distanced chairs and tables once used for eating.

Another group of people, however, had arrived much earlier — to be precise, at 5 a.m. By the time the students congregated at 8:45, Branson’s kitchen crew had lined up hundreds of lunch boxes, each with potato chips and chocolate-chip cookies, on tables adjoining the buffet counters.

“We’ll come in normally around five o’clock in the morning, and we’ll have prepped the day before, or if it’s a Monday, we’ll prep some stuff on that Friday before that Monday,” Chef Manager Marcus Trigg said. Epicurean Group, which operates the Branson kitchen, provides the menu online in an order form a week prior.

On this particular Friday, in addition to the snacks, the boxed lunches would each include the main dish of a chicken banh mi sandwich. Crews had already baked the chocolate-chip cookies the afternoon before, and the kitchen had received the chips in bulk.

Most preparation for the sandwich occurred between 7:30 and 8 that morning, Trigg said. Including extra lunches and about 35 salads, the kitchen would produce around 325 lunches total.

Just around the time students joined their Zoom advisory groups, Aroldo Reyes, of the kitchen crew, rolled out the first batch of sandwiches. Cammal Yah joined him to methodically distribute them to the lunch boxes lining the buffet.

Yah rolled out a second batch from the kitchen at 8:57, by which time the sound of plastic snaps permeated the otherwise tranquil atmosphere of the buffet as staff began to close the boxes one by one.

The current efforts by the kitchen crew represent the latest development in Branson’s lunch program. Cold lunches in those reusable trays replaced the smorgasbord of buffet options, not to mention breakfast and dessert offerings, available prior to the pandemic.

On the buffet itself rested red distribution bags, each stenciled with lunch cohort numbers, along with forlorn crumbs and signs proclaiming long-gone salad options from before the pandemic. The pandemic shut down offerings from serve-yourself soups to fried catfish, with most dishes now comprising salad wraps or sandwiches due to limited heating capacity.

Trigg hopes to restore hot food to Branson meals, saying, “It’s very different during this COVID time to be able to meet that need, but it’s wintertime, so if it were up to me — which I’m pushing [for]—I would like to give you guys hot food, and so we’re working on that right now.”

The school started offering hot lunches the week of Feb. 8, and students retrieved lunches from a beefed-up supply of hot boxes in front of the Commons — but the return of hot lunches also provides Trigg an opportunity to expand menus beyond cold salad wraps and sandwiches.

“Similar things to what we saw in years past, more of the fried rice, Asian-type options, more Latin food, but hot stuff,” Trigg said. “Stews, pastas, all those things that we used to have before COVID, within a certain limitation of what I can put inside that container.”

Back in the Commons, the kitchen crew finished distributing sandwiches, placing the last one in a lunchbox inside the kitchen at 9:08. In two minutes, Reyes began adhering preprinted labels — each with a student’s name, order and lunch cohort number — to the closed lunch boxes.

Aside from the sound of closing lunch boxes, the kitchen crew’s work takes place in an almost solemn silence; music occasionally wafts from the kitchen — only when its door opens — along with a teacher’s voice from the other side of the Commons. Despite the buffet’s quiet environs, however, a sense of community, driven by a common purpose of cooking, lives on.

The variables of the pandemic have tested this community of cuisine. Inclement weather in late January forced the school to suddenly move instruction online for a day, as students cannot eat indoors.

“Those things are kind of difficult,” Trigg said. “So, when that happens, if I’ve already made the menu and I already ordered the product, then I try to use whatever I already prepped.”

On this Friday, though some roads around Branson remained slick, work continued on preparing lunches. Crews sorted labeled boxes to lunch cohorts over the course of about half an hour. By 9:40 — still more than two hours before students would eat lunch — the crew had completed the bulk of lunch preparations.

Crewmember Gelda Perez then started placing the sorted boxes in the red distribution bags. By the next hour, the process would be effectively complete, and a lull overtook the Commons as the bags awaited pickup by the facilities staff.

Empty for B block, the entirety of the Commons sat quiet. At 10:52, kitchen staff set out some bags near the Commons entrance containing faculty meals, as well as extras for missed orders. Even as the Commons’ digital clock passed 11 o’clock, few adults appeared to eat.

Despite the lack of pre-pandemic camaraderie, the Commons remains the de facto centerpiece of Branson. And even if students no longer eat close to where their lunches originate, Trigg stays motivated.

“I’ve always had a passion for cooking, and I take everything I do to heart, so if you guys aren’t happy, then I’m not happy,” he said. “So my goal is to keep everybody happy — students, faculty, staff — and I always try to have an option for everybody so you can’t come down here and say, ‘I didn’t have anything to eat because there was nothing that I liked.’”

Trigg first came to Branson as a chef six years ago, following encouragement by fellow churchgoer and now-colleague Nathalio Gray. A promotion to a managerial position soon followed.

The school offers a more concrete schedule than his previous work in food preparation for hotels, he noted. And, he said, it also provides “more free rein to experiment [and] do what I like to do, which is make [different] kinds of food and keep people happy.”

About halfway through the 11 o’clock hour, that mission passed on to the school’s facilities crew, which picked up the distribution bags from the rear of the Commons.

Driving an elongated golf cart, around 11:40, Eli Jimenez dropped off a bag in front of the Commons to lunch cohort 7, then proceeded to drop another bag near the gym complex.

A half-hour later, the sound of students wafted across campus. Some headed to the Commons, but only to retrieve lunches for missed orders. Another contingent walked from the Quad to lunch cohort 7, opening their bag to lunches a day in the making.

Students in the cohort, such as sophomores Thayer Jacobs and Patricia DePalma, quickly munched through their chicken banh mi sandwiches, chocolate-chip cookies and potato chips. When finished, they removed the labels from their lunch boxes, disposed of any excess food and returned the boxes to the red cohort bag.

Facilities staff would return there around 1:30 to bring the boxes back to the Commons, where they would be washed and readied for the next meal, Trigg said. That’s when the kitchen staff baked the chocolate-chip cookies the day prior.

At that moment, for much of Branson, only three-quarters of the school day had passed. But as the lunch preparation process started anew, for the school’s kitchen crew, a new day had already begun.