New organizations boost fair to most clubs ever 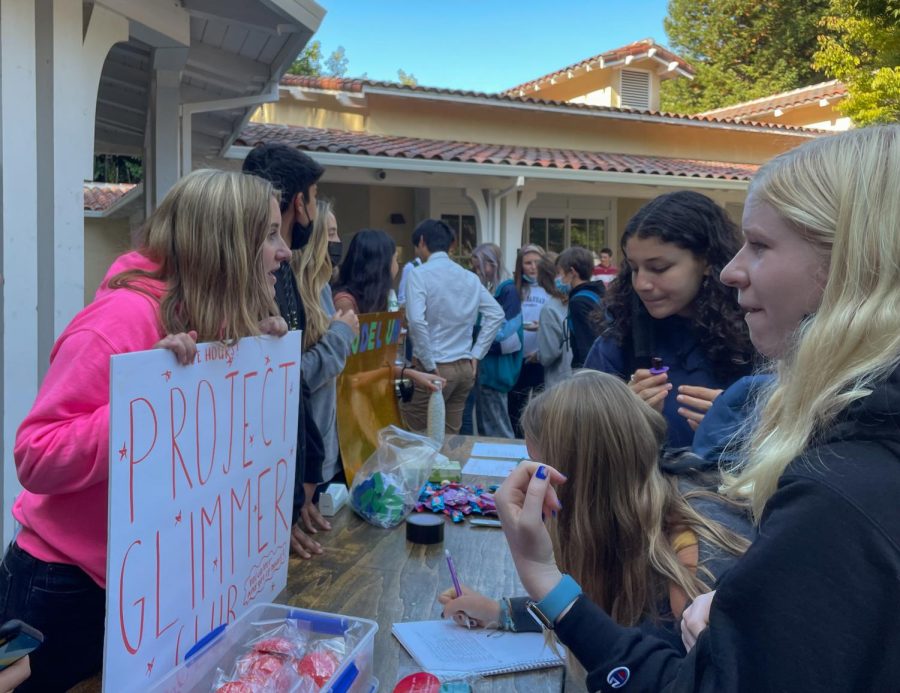 Cici Dedyo, one of the leaders of Project Glimmer, talks to students signing up.

A record-breaking 51 clubs registered for the fair this year, held on Sept. 17.

The broad range of clubs includes but is not limited to: community engagement, recreation, academics and athletics.

“We usually have had some spread of [these types of clubs], but not in these numbers,” said Sabrina Wilson, dean of student life.

The clubs fair has been at Branson in some form for as long as Wilson has been at the school — 17 years. However, last year due to the pandemic, it was online.

“It looks to me like the student body is really excited to have this opportunity and have the freedom to be together in clubs,” Wilson said.

When asked what difficulties she faced when planning the fair, Wilson said, “Everybody did what they needed to do … people cleaned up. It really wasn’t hard to put together at all, honestly. Folks are so enthused that students responded [to the form] really quickly.”

Clubs at Branson are a way to meet new people, try something new and partake in something you are truly passionate about. The lack of in-person clubs last year removed the social aspect between members.

“Students get to create a space that is pretty much their own. It’s totally student-driven,” Wilson said. “I love the variety and the diversity of interests.”

Fundraising money and managing a budget is another aspect of clubs that is returning this year. Clubs will be able to open accounts through the business office and raise funds to benefit themselves in the upcoming future.

“I hope to clarify [funds and accounts] within the next week … or early next week,” Wilson said.

Student leaders who were interviewed during the club fair felt enthusiastic, especially after a year without in-person clubs.

“It’s the most communal time I ever feel at Branson. Everyone’s here shouting and trying to get your attention for clubs, it’s just a great time,” Will Symonds, a senior, said. “Clubs are the best.”

“I really love clubs because it’s such a great way to get involved in the school and to meet new people and create little families and get excited about your interests,” said senior Olive Fahlen, leader of the new Forensic Club.

For juniors, the last time clubs fair happened in person was in 2019.

“I love the energy of clubs fair. The last time that we had it was my freshman year and I remember going around and signing up for everything. I wasn’t really expecting to ever lead [a club] but it’s just as fun,” said Alexa Polsky, a junior who leads the Women in STEM club.

“The Medical Club is [about] learning about different medical practices. You get to try new things, you can dissect a few things and just learn about medicine in general. I think [clubs] is a creative way to express what you enjoy doing,” said Andrew Peng, a sophomore who leads the Medical Club.

“In the Forensic Club, we are going to be tackling institutional issues within prisons and issues with race and the bias that a lot of people have [about] ex-cons. Also, true crime, talking about our past and surrounding that and expanding [on that],” Fahlen said.

“The Baking Club is a fundraising opportunity and social space. We’re going to do things like demos, watch parties, and fundraising,” said Drew Wilkinson, a sophomore who leads the Baking Club.