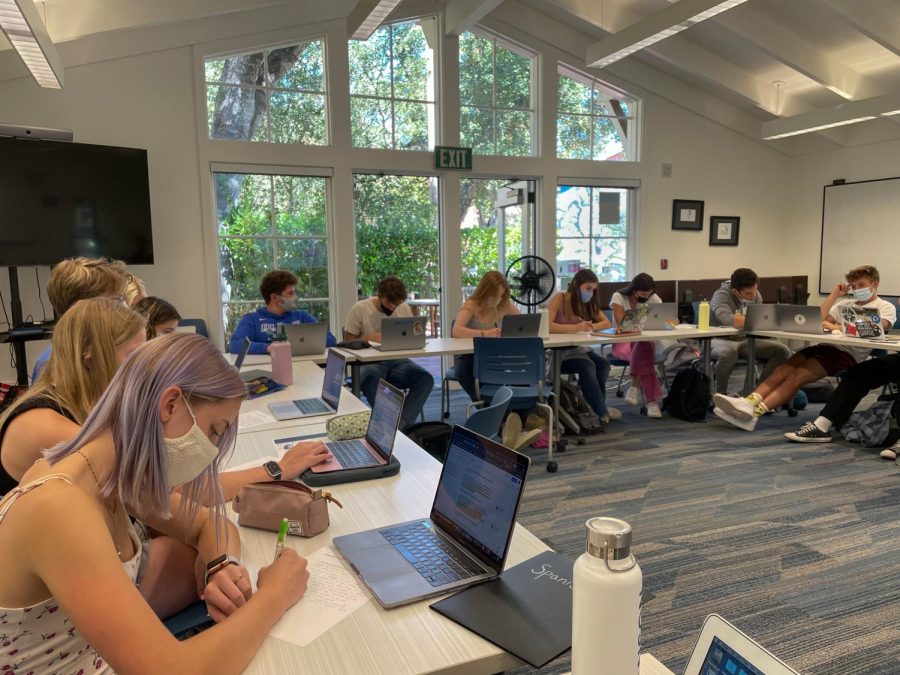 Seniors take a class in the Writing Center in September. The Immersive program, new for the 2021-22 school year, will replace senior capstone projects.

A new program at the conclusion of this school year will replace capstone projects, and unlike the senior capstones, all Branson students must participate.

School administrators have introduced the program, called Immersives, as a way for students to focus on one particular topic of their choice. The end-of-the-year curriculum will hone students’ focus: Every student will take one course May 23 to June 3 on campus during the regular hours, and be assessed on a pass/fail basis.

Students will have “a learning moment that’s not tied directly to external judgment, which will feel good,” said Jeff Symonds, interim director of studies.

Though the course choices haven’t been finalized yet, they will represent a diverse set of fields, from the arts to literature. Assistant Director of Studies Carol Herter, who said students will register for Immersives on MyBranson around January, revealed what her course could cover.

“It’s going to be kind of in the humanities,” she said, with a focus on folk crafts, quilting and means of survival from yesteryear. At least some administrators will join faculty members to teach the courses, she added.

Immersives will replace capstones, where seniors spent their final weeks on independently designed and executed projects. Symonds said many capstones involved students “doing something they already did,” and that some projects didn’t accomplish their initial goals. Connor Williams, a senior, disagreed.

“A successful capstone, for me, is just when [students do] something that they’re passionate about, that they want to do,” he said. “Whether or not you’re able to achieve your goal, for me, is sort of irrelevant to the point of capstones.”

Symonds said Immersives, now a few years in the making, will offer all students a “different kind” of experience that bridges various disciplines.

Immersives will also help balance the number of regular class meetings between the fall and spring semesters, Herter said. She called the program “refreshing” and a step up from the capstones. “We can’t have a school be stagnant in something, that just because we’ve had it in the past, we’re going to have it in the future.”

Some seniors, however, harbor concerns that the program will provide fewer choices than the capstones did. Immersives represent a “move toward making everything more rigid,” Sasha Sherstnev, a senior, said.

“It’s removed the students’ freedom to pursue something they were actually interested in,” he added. “I don’t think people are going to put more work in than they would if they were just playing golf. I think that they’re just going to be stuck in a classroom for the last weeks of senior year instead.”