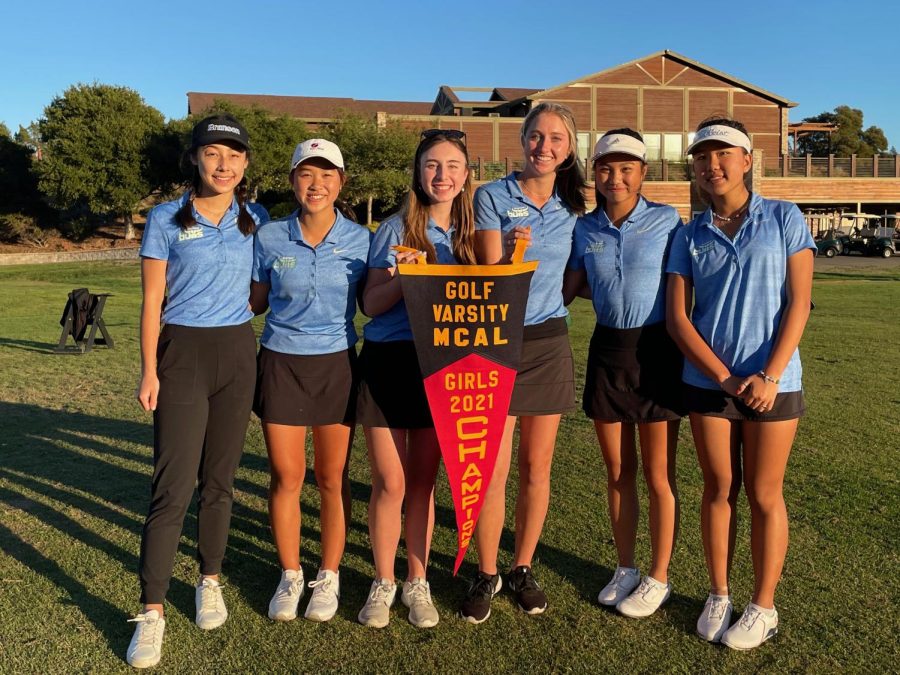 Girls golf’s MCAL victory this fall marked only one of the team’s many achievements. (Courtesy of Diane Keenley)

The Branson girls golf team is on a roll. With coach Terry Lim, the eight golfers brought home a banner, placing first in MCALs. This is the first time Branson has achieved these results since 2012.

“Although the nerves were high that day, it felt really good to come home with that win,” said team captain Kylie Kariotis.

Going into MCALs, Branson knew it would be tough to beat Redwood, especially since 18 holes is a lot harder than nine holes — the number of holes played during the regular season. Players start their rounds about 10 minutes after the person before them, so when a round is finished, each player waits for her teammate to see how she performed.

Earlier this season, Redwood gave the team a tough fight for both games they played, neither of which were easy to win, but Branson did.

“Golf is a sport where anyone can have a good or bad day, and it can change in an instant so you never know how someone might do that day,” said freshman Lizzy Liu.

The team moved on to NCS with an exciting record to put on the board. At this tournament, they placed second, continuing their winning streak. Throughout the season the girls stayed focused, which paid off with impressive results.

After NCS, Liu and her teammate Aimee Yang were invited to NCS Division I, where they competed on Nov. 1. Liu shot 75 and Yang shot 84. As a result, Lizzy placed 15th out of 144 girls.

“We had a great team, great season, and great record,” said Lim, who is in his first year as coach.

Liu said that they couldn’t have done it without him. “He is always there for us and super supportive. He is just the coolest person ever.”

Not only do the players have a great relationship with Lim, but also with each other.

Both Kariotis and Liu described the golf team as an amazing way to meet new people as well as a place to have fun. The team is “very supportive and we push each other to be great,” Liu said when describing her favorite part of the season.

Kariotis had the same outlook on the team, saying, “We built a really strong community and close team. We all always support each other.” The golf team not only had a great season, but they had fun in the process.

“Winning feels great, but at the end of the day, having a supportive team feels better,” Kariotis said.