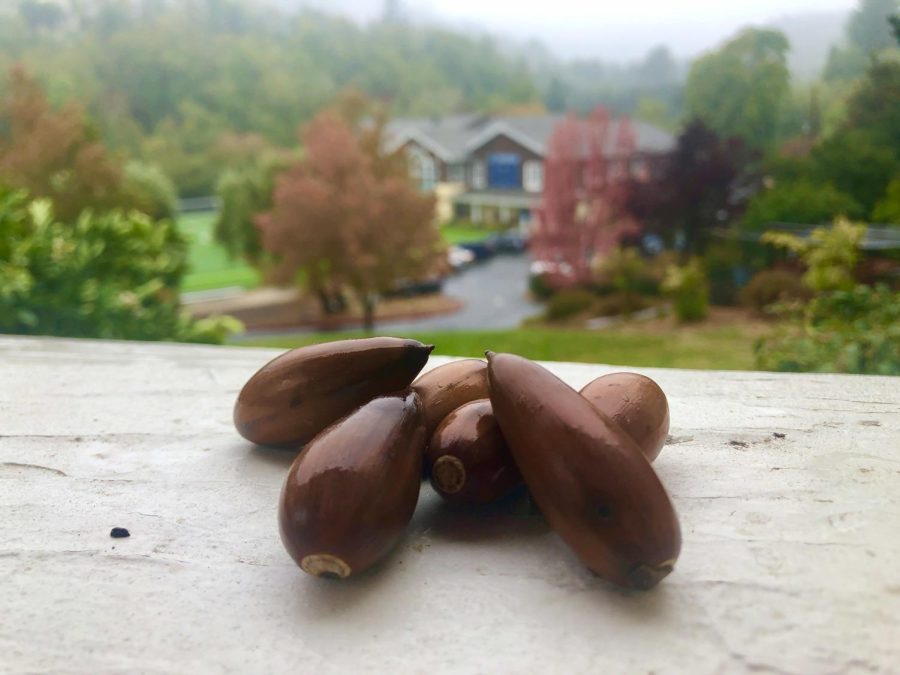 Students, under the guidance of science teacher Karl Schmidt, made cookies from campus acorns.

During a couple of weeks in late September and early October, a group of students led by Branson science teacher Karl Schmidt harvested acorns from many of the local oak trees on campus. They then processed them into an edible food source.

“The idea is that we have a bunch of oak trees that drop a bunch of acorns in early fall. Those historically have been eaten by people, but it’s not something we do as much today. So, I wanted to explore that myself, and when I mentioned it to my students last year, many were eager to help,” Schmidt said.

The first step to processing acorns is the harvest. Many were already scattered on the ground across campus, making collection very efficient. In 15 minutes, Schmidt and his group of 20 students collected over five pounds of Oregon white oak and valley oak acorns.

“We started out by just meeting during a lunch period and collecting the acorns whether by the bigger tree on top of the stairs, on the hill by the road, or down by the field,” Lillie Lehman, a sophomore, said. “We put them in cardboard boxes, and then those boxes sat in the physics rooms by the library for a couple of weeks while they dried out.”

After drying, students shelled the acorns and removed the meat within each acorn. They used hammers and mallets to do so after putting the acorn in a cardboard cutout to hold it in place.

“After that, you would make sure there weren’t any weevil holes so that the meat inside wouldn’t get contaminated by anything … sometimes when you cracked them open, there was this very small-looking worm creature inside, the weevil, and it was so scary because some of them were super large, like 4 centimeters in length!” Lehman said.

Once cracking was complete, Schmidt then soaked the acorns in cold water to leech out the bitter tannins, a compound found in many species of plants.

“Every morning I dumped off the water and refilled it, probably for about two weeks, and then afterward, I put them all in a dehydrator to dry them out,” Schmidt said.

The dried-out acorns were then ground into flour using a handheld blender and water to soften the meat. After grinding was complete, Schmidt used the new acorn flour to bake chocolate chip cookies.

“Roughly one cup of acorn flour and one cup of wheat flour yielded over two dozen cookies, and they taste great,” Schmidt said. “I hope to later on use the rest of the flour to make a variety of baked goods ranging from bread to pancakes to even muffins.”

“I’m kind of excited to see what an acorn bread looks and tastes like, to see if it’s similar to a dense bread, like banana bread, or if it’s lighter. Also, baking muffins would be a pretty cool idea,”  Lehman said.

As Schmidt put it, the entire harvesting process from start to finish was a new learning experience for everyone.

“Partly I think there’s more than one way to harvest acorns, and that’s been part of what I’ve been trying to figure out is which way works best. For instance, I thought you needed to let the acorns dry a while before you cracked them open, and that’s not necessarily true. In fact, a lot of them started sprouting.”

Laila Elkhoury, a sophomore at Branson, said she learned how to tell whether or not an acorn had weevils inside, as well as the fact that they stayed in the soil for over two years before emerging to lay eggs in a new acorn.

“This experience was super fun, especially because I was able to do it with my friends. It was also highly anticipated because I had heard about Karl’s acorn bread early last year and had always been curious about it,” Elkhoury said.

“I think it’s just neat because it’s always good to form a relationship with where your food comes from, and I think even doing that we would find all these different commercial things in our food,” Schmidt said. “Ultimately, everything is coming from nature somehow, and I think it’s just a good experience for people to get a sense of that.”

Lehman echoed a similar sentiment, saying, “I think I definitely have never thought of acorns as a food source before, especially in the sense that they were just another seed of a plant, and that there was really nothing edible to them. So it was definitely kind of interesting to think about using your surroundings for food and that we have a natural food source on campus in these trees.”

As for the future of this event, Schmidt said, “Hopefully we can get more people to partake in this experience next year, and that this would be something we could do as a group every fall.”