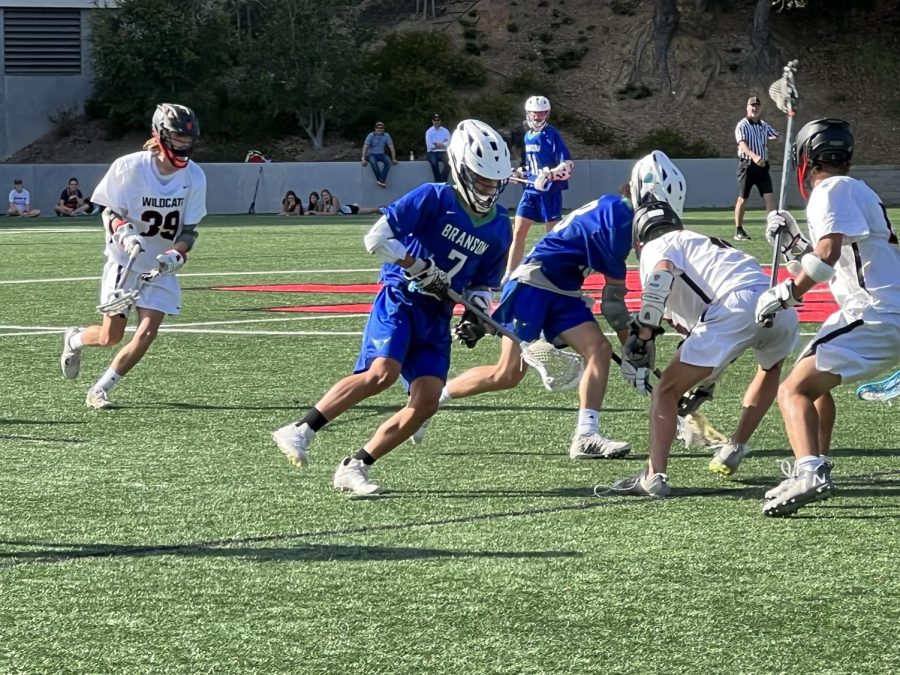 The Branson boys lacrosse team plays against Marin Academy, April 6, 2022, in a game that ended in a loss. The team has concluded a season marred by injuries but also marked by skill and rapport.

With the academic school year coming to an end, Branson’s boys lacrosse team has wrapped up, marking their triumphal spring season.

The team did not face an easy journey, with several players suffering injuries this spring. However, progress is just as important as performance, and having the dedication that the team has is essential to its ability to succeed.

“We worked really hard and improved a lot throughout the year, and we progressed so much as a team,” Elliot Perelmuter, a freshman, said.

And this hard work certainly paid off.

Through rigorous practice and training all season, the team’s athleticism, coordination and skill as a whole skyrocketed. Many of the teams from other schools that Branson faced are larger, and the team fielded fierce competition every week.

“It definitely is a challenge as a small-school team, but that doesn’t stop us from competing,” Callahan Green, a sophomore, said.

Despite this competition, the team still persevered and put up a notable fight against all the schools it played against. Through this hard work, the team got their revenge on many of the teams they lost to early in the season by beating them in matches later during the season.

“It was an awesome feeling to finally beat some of the teams which we used to lose to,” Green said.

Success clearly appeared on the field, but there was also success off of it. Friendships and rapport built between athletes, as well as with their coaches, were a massive part of being on the team.

“I thought it was really fun, and I enjoyed being able to learn from the upperclassmen,” Perelmuter said. “Playing with them and learning from them was a really good experience.”

In May, the team battled for the NCS title. In their first game, they fought against Northgate, winning a whopping 8-1 before ultimately falling short against Justin-Siena.

Although the team will lose its seniors, it could come back next spring stronger than ever, and they will continue to grow into a larger threat to other schools.