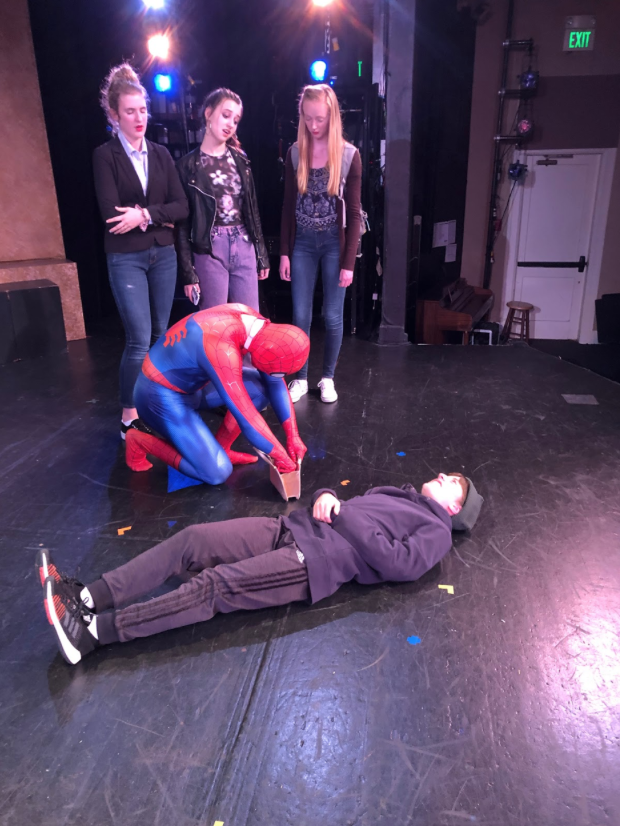 Recently, the Advanced Acting class put on a production of “Peter Parker and the Kid Who Flew” and “Subatomic: A Stature Story,” two one-acts based on the Marvel Universe.

Both scripts are part of pilot program at Disney. Their goal is to create a series of one-acts to circulate through high school theater programs around the country.

The scripts the Advanced Acting class received are still in the process of being edited. Their performance was the first time the scripts had seen the stage and offered the writers at Disney insight on where to improve their script.

“It was interesting, it posed its challenges,” said Kelly Napolitana, a member of the Advanced Acting class, about working with a script still in editing  “You don’t always agree with the decisions that are being made in the script and they don’t always seem to make necessarily sense to you as an actor.”

Napolitana also said that she felt more free to ad-lib, or go off script because it was not “set in stone.”

Disney’s goal in creating this series of one-acts is to raise awareness for sensitive topics while attempting to make the issues more relatable to high school students, thus the plots being set in the Marvel Universe.

“Peter Parker and the Kid Who Flew” is “a show about being comfortable with yourself and realizing that the greatest superpower is being there for those who are around you,” Napolitana said. It is based on the Marvel character, Spiderman. The play follows him and his friend group after they find a suicide note left by “the Kid Who Flew.” Napolitana played Judge, or “the Kid Who Flew.”

“I don’t identify as suicidal. It was interesting to kind of understand Judge through doing the show a whole bunch of times,” Napolitana said. She has never played a role dealing with these kind of mental issues before.

“Subatomic: A Stature Story” was about Cassie, Ant-Man’s daughter, and her experience in helping her friend, Ana, in the aftermath of sexual assault.

“It was the first time I’ve been in like a production with these kinds of issues … it was a little bit uncomfortable playing someone who sexually assaults someone or tries to make someone feel uncomfortable,”  Zach Kariotis, another member of the Advanced Acting class, said.

The Advanced Acting class filmed their performance and sent it to Disney along with their notes on the lines in the script.