Art for the Environment 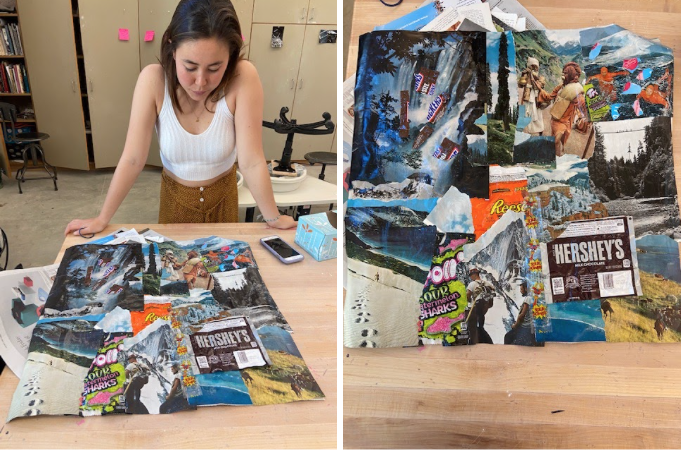 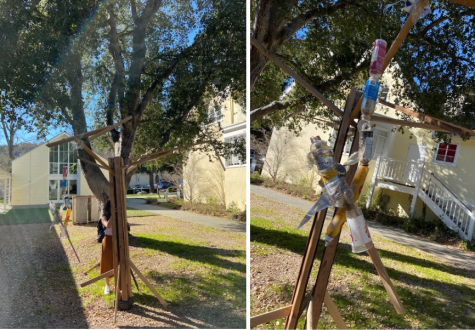 Junior Maddie Lowe poses with the skeleton of her project. This tree-like structure will eventually support a collaged canopy made of plastic and other trash gathered from around campus. 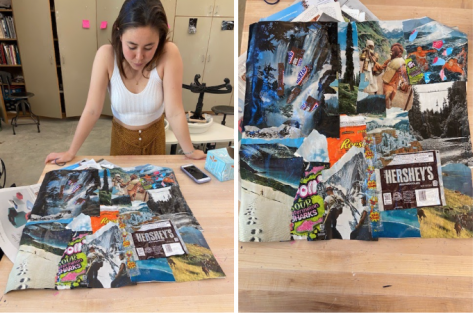 Lowe poses with a collage. This collage is one part of a larger tapestry that will form the “leaves” of the piece’s tree.

Student-activists Maddie Lowe and Pierce Sanderson, a senior, are tackling Branson’s sustainability issues with an art project. Over the next year, they plan to render a tree covered in discarded plastics gathered from Branson in order to raise awareness about how ubiquitous plastic is in our community and how it will ultimately consume our natural surroundings.

Lowe expresses that the tree itself is a symbol. “Trees are necessary for life,” she said. “This project shows how we’re forcing nature to become synthetic.”

They were inspired by Branson’s wasteful use of plastic. Like many Branson students, Sanderson and Lowe are both active in helping the environment. But in some ways, they feel that Branson’s student-activist community is hypocritical when dealing with the issues that surround climate change.

“People in our community talk about climate change and talk about being an activist because it’s trendy right now,” Lowe said. “But they use a lot of plastic.”

The goal of her project is to confront plastic use within Branson’s community and to raise awareness about our wasteful behavior. The trash she and Sanderson gathered to make their project — two full bags of plastic — all came from Branson. She hopes that the final product will inspire Branson’s students and faculty to use less plastic in their everyday lives — even if they can’t eliminate it completely.

However, Lowe and Sanderson are hesitant over whether their final project will achieve their lofty goals. Currently, they have crafted the skeleton of their tree and drafted a few sample collages. But Maddie admits that she’s not sure whether they will be able to complete the project by the end of her senior year.

“Maybe we’ll finish the project my senior year, I might work on it next year. Or maybe we’ll never finish,” she said. “We were going to do more with it, I’m sad that we didn’t.”

Still, Lowe remains optimistic. She argues that even if they don’t end up completing the project, the process of creating it was personally meaningful.

“The process taught us about how much our privileged community which calls itself environmentally friendly actually uses so much plastic,” she said.

She also hopes that students and faculty also take small, tangible steps to reduce their personal plastic use. Some easy things to do are carry a water bottle from home, eat out less, and order fewer things from online retailers. She also says that Branson’s snack shack is a big source of waste; she recommends bringing snacks from home, preferably ones that use less packaging.