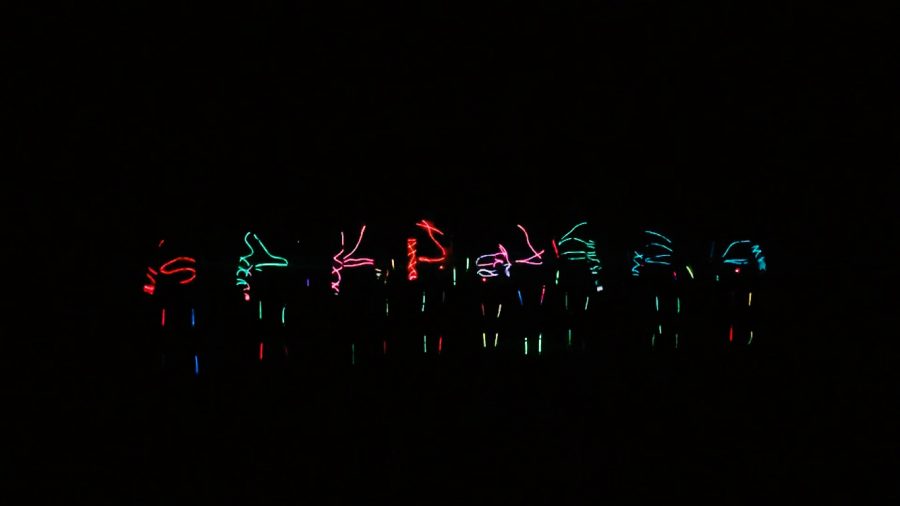 The annual Junior Talent Show was filled with many things; singing, dancing and a quite touching senior tribute. But what it doesn’t yet have is a full-fledged review, which is why The Blazer is taking up that challenge.

The show kicked off quite quickly with hosts Kelly Napolitana and Foster Lehman, who did a fair job of warming up the crowd with a few obviously scripted but still entertaining jokes before letting the first presenter, Thomas Upin, take the stage. The commercial he showed was a product of his and other juniors’ (Spencer Hao, Danny Lien and Marco Giannini) minds, and it was one of the high points of the afternoon.

The performance was soon followed by the first appearance of one of the major themes of the night:  the stress of junior year.

During some MC dialogue, Lehman joked about how overwhelming the Branson workload was. This received many cheers from me and the crowd, and both Lehman and Napolitana shined when they touched on what the audience related to.

Their dialogue was followed by the “Bad Horror Movie Trailer,” which really should be more aptly renamed, as it was anything but bad. Sedona Ward, Maya King, Sydney Pearson and Julia Wick all evidently put a lot of effort into making sure the jokes landed and were relatable, touching on elements of both Branson and current pop culture, with cracks both about the infamous “snort snort” cheer and VSCO girls.

The next act returned to the musical scene, with Isabel Folkers, backed by Lehman, Napolitana, Zach Kariotis, and Sam Yolles, belting out an incredible rendition of Queen’s “Don’t Stop Me Now,” complete with saxophone solo by Foster. It was probably one of the most high energy performances of the night, showcasing vocal, instrumental, and even dancing talents, with a hitch kick thrown in during the performance.

Act 1 ended with Ellie Wines, Katie Stovell, Carly Yoon, Alexa Garay, Hodges Day, Naomi Kessinger, Avery Hansen, Helena Curry, Amanda Davis, Serafina Carlucci, Caitlin Evers, Stasia Winslow, Anna Rewick, Maddie Lowe and May Ling Roberts busting out for a glow-in-the-dark dance session. While the concept, seen on shows like America’s Got Talent, was one of the most interesting of the night, the execution was a bit rushed, most likely due to the sheer amount of people trying to coordinate their moves.

As Napolitana and Lehman made their final appearances, one couldn’t help but notice just how hard they were trying to drive the point about the murderer home. However, the murder mystery was put on hold as the Blu Faces, who, as I discovered, would not be dancing to songs by Blue Man Group, but was the athletic men’s dance group consisting of Jack Dunning, Jack Talbert, Oliver Koehne, Max Shalev, Jake McFadden, Will McLeod, Cade Cessna, Miles Keeffe, Julian Getsey and Josh Batteer. While I had been told that this group was not up to par with some of the others, I was impressed with their coordination and energy, despite the music being ever so slightly too loud.

We then returned to the video screen, with Stone Shepard, Zac Warrin, Justin Forde, Strat Tolmie, Connor Thorp and Zac Singer displaying “Recent Nightmares,” a clever use of puns like “Rolling Stones.”

These puns were followed immediately by another video, reviving the “styrofoam head” meme, featuring juniors Sarah Lind, Ciara Tran, Alana Talley, and Hodges Day. It was followed by probably one of my favorite segments of the night, the “Senior Tribute,” in which the juniors all brainstormed superlatives for the class of 2020. I found this to be incredibly touching, and an incredibly caring tribute, making it a standout of the acts.

After a quick bit of MC dialogue, Mark Harmon, Lawrence Bancroft, James Grossman, Niki Prongos, and Amrit Baveja closed out with the song “Careless Whisper,” providing a strong finish to the night.

As Lehmen and Napolitana returned, the entire class of 2021 broke out into “Dancing in the Moonlight,” where the energy was high, the enthusiasm was evident, and I couldn’t wait to see how they resolved the thread of the murder.

But despite being one of the major themes in the first act, with the talent show itself being named “Freaky Friday,” the lack of a satisfying conclusion to this plot was slightly disappointing, especially considering how much time the class still had. However, after seeing the show, no one can doubt that the Junior class has talent; boatloads of it. The 2019 junior talent show was a success, and the best one I’ve ever seen.