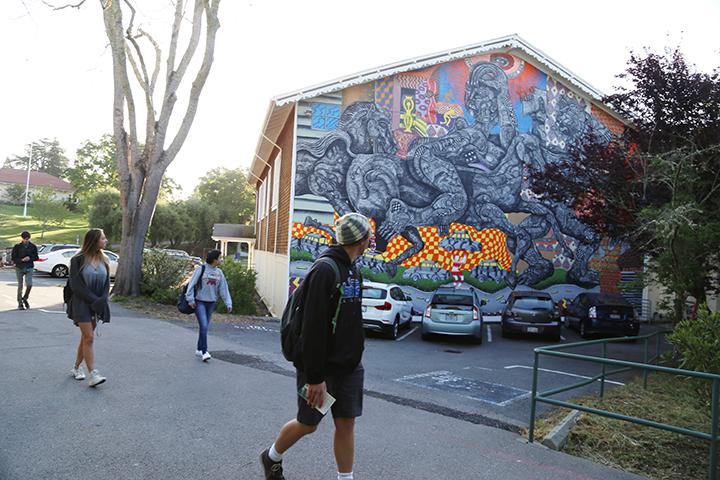 Assemblies are now held in the gym

After having all-school assemblies in the auditorium for longer than anyone can remember, assembly was moved this year to the gym to satisfy fire regulations.

The abrupt move of all-school assembly to the gym was necessary, but both the faculty and the students are nostalgic for the auditorium.

“Every single time we had assembly in the theater we were in violation of the fire code,” said Meredith Herrera, the dean of student life. “That was literally the only reason.”

Until the proposed ballot measure allowing more students to enroll at Branson, the gym is the permanent location for assembly, despite it lacking the personal feel the auditorium had.

“I much prefer the theater… [The gym] doesn’t feel as intimate. I’m not crazy about it at all,” said Head of School Chris Mazzola.

When asked about the feeling of being in the gym, Student Body Co-President Benji Wu said, “It takes away … the connection we used to have in that space … Being in the gym gives in informal feel; so nobody feels like they need to pay attention … I’ve noticed from on stage that people are on their phones.”

While there is nothing the school can do to restore the environment the theater produced, the school has put a lot of effort into making the gym a better space for assembly. Over the summer, work was done to completely overhaul the space to better accommodate assembly.

“It was a very expensive setup, the projector, the sound system, the screen. I think the whole project was $75,000. There had to be a lot of electrical work done … It was a big expensive project,” Mazzola said.

While the gym isn’t perfect, the school is taking steps in the right direction to make the gym more comfortable by pursuing the possibility of replacing the bleachers.

“Here’s what we would like to do … replace the gym bleachers with motorized bleachers. We will do it … when we have a budget that allows it … That is something that needs to get done; they’re uncomfortable, they’re old, and they need to be motorized anyway, “ Mazzola said.

In addition, depending on the approval of the ballot for an increase in enrollment starting next year, it’s possible assembly gets moved again.

“We would like to build a bigger theater, but we have to get the ballot, then we have to raise money, then we have to get permission to build something new. That will take a couple years. I  am also really interested in the idea of building some sort of outdoor amphitheater because most of the time we can have assemblies outside which is awesome. I think everyone would love that. We will be pursuing both of those ideas, but for now, unless someone has a better idea, we don’t have another place where we can fit everybody” Mazzola said.